What is Perimenopause and Menopause?

What is perimenopause and menopause?

Perimenopause is the time when hormonal changes occur in your body. Beginning in your late 30’s, 40’s and early 50’s, a disruption in your menstrual cycle may occur many times before menopause.

If you are currently experiencing symptoms such as irregular periods, heavy bleeding, hot flashes, sleep disruption, headaches, dry eyes, hair loss, and weight gain, or extreme emotional distress, you can be assured that these are all common signs of perimenopause.

The hormonal changes which occur during perimenopause are responsible for many of these symptoms. For some, most of the symptoms only last for a few months. For others, no symptoms occur. What’s left is mild to severe symptoms. Generally, however, many women feel uneasy during this time; hot flashes, palpitations, fatigue, mood swings and even irrational thinking are among the many signs accompanying perimenopause. 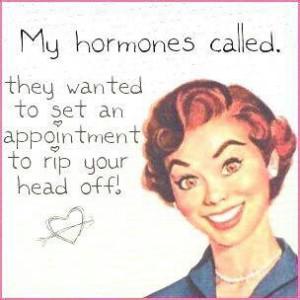 Perimenopause does not often segue into menopause right away. Depending upon the woman, it could take months to years before menopause occurs. However, the symptoms are influenced by lifestyle.

Have you been engaged in a proper diet and exercise regimen? Has stress been a major factor in your life? Do you drink or smoke in excess? Any of these factors can play an important part on the type of symptoms and their severity.

After a period of time, you will eventually become menopausal. What is menopause? It is that point in time, without having had a menstrual period for one year, you are considered to be in the menopause cycle.

While the average ages is considered to be around 52; menopause can occur at any time between 30 and 60 years of age. The cycle of menopause can either be difficult or easy. For example: let’s assume you haven’t had a period for 6 months. Suddenly, in the 7th month it appears. Yikes! Conversely, your period stops and doesn’t return at all for a year. Easy! It depends upon the woman; it’s as simple as that. The symptoms accompanying menopause can be difficult or easy as well. Some women experience no symptoms, while others are plagued with hot flashes, night sweats, irritability, spotting, and the full range of mood swings which invariably occur.

Why is there such a wide gap in response to menopause? It is the hormonal imbalances and changes that cause the fluctuation. In addition, diet, lifestyle and genetics also play a major role in determining what type of symptom response will occur.

While perimenopause and menopause are natural to a women’s life cycle, neither have to be looked upon with fear or trepidation. Instead, view them both as the beginning of a new phase in your life cycle.

What we Recommend on Perimenopause and Menopause: