Hey Cosmo! Cancer is not a Diet Plan 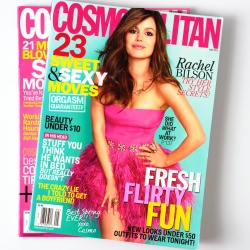 The popular woman’s magazine Cosmopolitan was criticized by an irate social media users this week after it posted a controversial weight loss article on Twitter. Lose weight without exercise! Well there was a reason why….

Cosmopolitan, one of the country’s most widely distributed consumer magazines, has long come under fire for its focus on physical attractiveness.

On Monday, many people thought the publication went too far with a tweet: “How This Woman Lost 44 Pounds Without *ANY* Exercise.” It featured a photo of a fit woman in a pink lace-up crop top.

Readers who clicked on the link to find out about an astonishing weight loss secret were taken aback by the story of a woman who lost 44 pounds after being diagnosed with a rare cancer. The story’s focus on slimming down infuriated them.

Cosmopolitan has since deleted the offending tweet but not before several journalists took screenshots. The story, though, was still on its website as of early Wednesday morning. And neither Cosmopolitan nor its parent company, Hearst, had yet commented on the controversy.

The story’s headline on Cosmopolitan’s website now reads: “A Serious Health Scare Helped Me Love My Body More Than Ever.” An editor’s note below the article said the story had been updated, but it’s unclear whether the headline was changed.

Simone Harbinson is a 31-year-old from Melbourne, Australia, who’s healthier than ever, but the mother of two still has a complicated relationship with her body. “I was never satisfied with my shape or weight,” she says.

The story then describes Harbinson’s painful battle with a life-threatening illness. She endured various surgeries, a partial lung collapse, PTSD and a damaged disc in her back.

The piece then shifts to focus on her weight loss and promotes a diet called “The Bod” designed by an Australian fitness model. Harbinson said she lost 44 pounds on the diet, even though she wasn’t able to make it to the gym.

The articles link to The Bod’s product page, where “Starter” versions of the diet program can be purchased. Throughout, the piece includes Harbinson’s Instagram posts that offer discount codes for the program.

While the story doesn’t state cancer directly helped her lose the weight — it was merely the inciting incident that led Harbinson to stumble upon The Bod — many on Twitter took it that way.

Hey @Cosmopolitan – as a cancer doctor, I'm horrified. How incredibly disrespectful and insensitive. You owe a lot of patients an apology. https://t.co/sXd1SgU6ox