Right in line with Virtual Reality Dating, in 2013, the Spike Jonze film Her, starring Joaquin Phoenix, explored the idea of a man falling genuinely in love with a computer system. And the general consensus (beyond that Phoenix, as always, gave a wonderful performance) was that the film was at once endearing and troubling.

A review at US Weekly might have put it in the best words: it was a sublimely original film about human connections that felt personal – yet makes a haunting statement about all of society. The same review goes on to cite Jonze himself suggesting that the film isn’t really fiction, but speaks instead to our very real emotional attachment to technology.

If you didn’t see it, I’d encourage you to go back and watch, because it’s really quite an interesting film. In this piece however the idea is that it might have been even more real than we gave it credit for at the time. Because at the time, we didn’t realize just how pervasive virtual reality would become in a matter of years.

Actually, it’s easy to look at virtual reality right now as a mild failure. You don’t have to be a gamer yourself to recognize that VR headsets haven’t exactly taken over the world of home entertainment. When a new gaming console comes out, you know about it.

Think back to when the Xbox One and PlayStation 4 first arrived as “next generation” consoles, and you could hardly go online without reading about them. Or think about just last year, when you could hardly turn on the television without seeing ads for the Nintendo Switch. Well, VR hasn’t been like that. True the internet is heavily sprinkled with literature about VR – but usually it’s about how the industry is doing, rather than just how great a given device or experience is.

Where virtual reality isn’t at all a failure however is in the breadth of its growth. In other words, the technology isn’t just taking on conventional gaming, but rather making waves in all kinds of areas. Branching slightly off of gaming, it’s starting to impact digital casinos, which have long strived for immersive perfection in browser windows. Gonzo’s Quest, an adventure game in 3D animation from NetEnt, has become the first major slot reel put into VR, and the fact that there’s even one is saying something. Think about it: does a slot arcade really need to be in VR? What about home design applications, or travel destination viwers, or digital painting applications? None of these need to be in VR. But they are, and that’s what brings us to online dating.

Online dating does not need to transition into virtual reality. Already, programs from Tinder to OKCupid (to say nothing of ordinary social media apps) have revolutionized the ways in which we meet people. We present and perfect digital personae, cultivate the best possible images of ourselves, and set out into the online world to meet mathematically appropriate matches, and then we talk and flirt and share and pretend we’re not making decisions based 90 percent on photos.

While some of these apps are actually quite effective at fostering lasting relationships, the process itself is already very detached and wholly digital. There isn’t a need for a new technological depth such as Virtual Realty Dating.

Sure enough, however, we’re seeing the beginning of VR immersive dating – the idea being that by stepping into VR instead of logging onto an app, you can “meet” your match face-to-face, as opposed to simply looking at a chat box. It’s an evolution that feels inevitable, yet one that also feels somehow sad.

What will be interesting to see is how well virtual reality dating is embraced in the coming years. Because at some point, people actually want to meet. But until then, being able to meet them virtually is pretty cool.

4 Surprising Reasons Why He’s Not Calling You Back

5 Proven Secrets on How to Get Over a Breakup Fast

6 Conversations You Must Avoid on a First Date

How to Know if a Guy Likes You: 15 Signs

Start to Improve Your Life Today – Get Your FREE GUIDE! 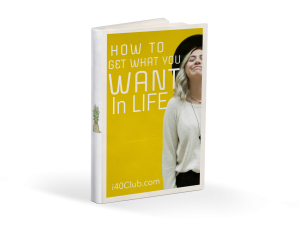 ABOUT US
Join us for your daily dose of wellness for women. i40Club does not provide medical advice, diagnosis, or treatment. Any information published on this website or by this brand is not intended as a substitute for medical advice, and you should not take any action before consulting with a healthcare professional.
FOLLOW US
© Copyright 2020 - i40Club